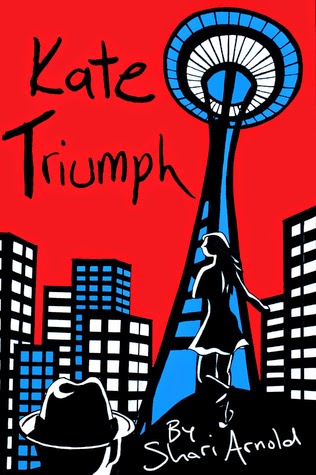 Normal is so overrated. At least that’s what seventeen-year-old Kate Triumph tells herself everyday. But the truth is she lives in constant fear that someone will discover how not normal she really is. With her startling speed and her unusual ability to heal, Kate believes she’s something of a freak.

He claims he’s her father, sticks around for a few days and leaves her a plane ticket. “Come to Mercer Island,” he says. “Give me a chance to get to know you.” Soon Kate is floundering in a world of new: new address, new car, new high school and, of course, new father. Not to mention Zack, her intriguing new neighbor, who makes her want to abandon her steadfast rule of never allowing anyone to get too close. But when she discovers someone is trying to kill her, life for Kate gets a bit more complicated. And a lot less normal.

Guest Post
There is always a story behind the story when it comes to writing a novel. With KATE TRIUMPH I was actually working on something completely different when her name popped into my head. The name was so strong and intense I knew she had to be something special. My husband thought the name sounded like some kind of super hero but I didn’t want to write a super hero. I wanted her to be amazing but I also wanted people to be able to relate to her.
And then it hit me. What if James Bond had a daughter? What if she was stronger and quicker and all the things you’d have to be to do the things a spy would do, and yet she’s living in the real world. Oh, and she’s seventeen. I knew she’d have an overprotective parent, one who wouldn’t want anyone to know about her abilities, and that Kate herself would feel like a freak.
And once I knew these things I immediately had to abandon what I was originally working on and move on to KATE. She was that insistent. When I finished the book I thought I was done. But that wasn’t the case at all. She made it clear she was edgier and a bit more vulnerable. Her sense of humor needed to come through as well. Kate is definitely one of my favorite characters I’ve written. All those years of watching Buffy the Vampire Slayer and Veronica Mars definitely paid off. She’s spunky like Veronica and intense like Buffy. Not to mention she will always win in a fight.

AUTHOR BIO:
Shari Arnold grew up in California and Utah but now resides in Connecticut, with her husband and two kids, where she finds it difficult to trust a beach without waves. She writes Young Adult fiction because it's her favorite. And occasionally she takes photographs.