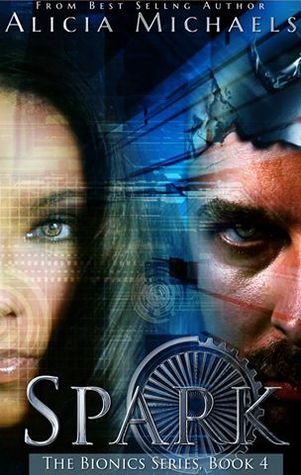 Spark is the fourth book in the Bionics series. A series about a world where humans that were injured after a blast had bionic prosthetics to makes their bodies whole again. After a few years those with bionic parts were declared dangerous and were hunted by the government. But a few of the Bionics are gathered in an underground base, fighting for the Resistance, an organization that want Bionics to be free to live among humans.

In Spark, the story of Blythe, Dax, the Resistance and their fight against the government, and now the Rejects, Bionics who want to take control of the world, continues on. This time the Rejects are holding a whole town hostage, killing the people one by one just to make a point to the government. The Resistance won't let that happen, especially since this is just more fuel to the government's propaganda against all Bionics.

This story is from Blythe's PoV and even though she is not my favorite character in the book, I loved how she changed through out the story. Especially loved how things ended. The series is just getting better and better, I can't wait to see how it all ends.