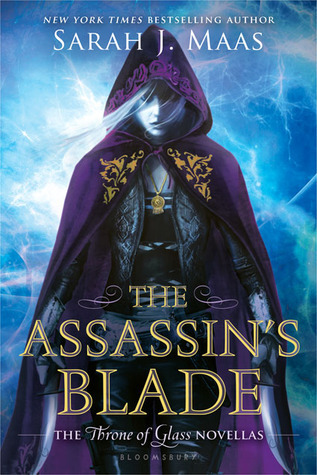 The Assassin's Blade is the bind up of all 5 prequel novellas for the Throne of Glass. First, let me say that I haven't read the Throne of Glass because I wanted to read this one before I got started with the rest of the story. I loved this book so much. And even though, deep down I knew how it was going to end, it broke my heart. So, here are my thoughts on each novella.

The Assassin and the Pirate Lord
In this story we are intoduced to Celaena, a 16 year old assassin. She is the best and most feared assassin of her Guild after her master. In this novella she is sent to a remote island to claim something for her master without realizing that what she is there to collect is slaves. With the help of Sam, the assassin she despises the most in her Guild, Celaena will try to find a way to free the slaves and get away with it too.

I loved this first story so much. Celaena is a very strong, smart and independent person. Everything you would expect from an assassin. Also I loved the connection between Sam and her, I could really see those two together.

This little novella is full of suspence, action and of course sword fights. Loved every bit of it. Also it starts to set the mood for the world that everthing is taking place, gives us a little bit of information of what to expect in the future.

The Assassin and the Healer
In this very short novella we get to see Celaena through the eyes of Yelena, a barmaid/healer trapped in a small town, unable to follow her dreams. It was really nice seeing a more humane side of Celaena, it made me love her even more. This story takes place between the Assassin and the Pirate Lord and the Assassin and the Desert and it shows us the decisions Celaena had to take in order to keep on following her own path in life. Really good, even though so damn small.

The Assassin and the Desert
After freeing the slaves despite the commands of her master, Celaena is sent to the Red Dessert to train with the Silent Assassins and try to gain a letter of recommendation from their Master. When she arrives there, she is surprised to find that despite the toughness of the desert this place is a welcome and warm home to lots of assassins and their caring master. There Celaena will start to make friends and train in order to catch the eye of the master. But besides her training Celaena soon discovers that there are more improtant things she should worry about while she is there. The Silent Assassins have an enemy and this enemy has a spy inside the city walls.

I really loved this story. As much as I did the previous ones. This had a more bitter feeling and I can't wait to learn a few things about Celaena's past. Reading about her adventures makes me want to know her story and how she became who she is.

The Assassin and the Underworld
In the fourth prequel of The Throne of Glass, the story of Celaena starts right after she returns from her summer in the Red Desert. Before she gets the chance to announce to her master that she can now pay for her freedom she is assigned one last mission. It seems like a good chance to help fight slavery and reunite with Sam, but as the past has shown, not everything is what it seems, and almost everyone is ready to betray the young assassin.

I loved this prequel as much as the rest of them. It was good to finally see the city that Celaena lives, walk through the streets, travel through the rooftops and swim, yes swim, in the sewers.

Another good thing about this novella is that Sam is back and this time the relationship between the two assassin is more intimate and goes into a whole other level. We also get to see a Celaena in her natural environment, doing things she loves to do, like playing music and going to the theater. I also think we had a brief glimpse of the prince, and if I am right...oh my, we are in for a treat in the actual book.

The Assassin and the Empire
The final prequel novella. This takes place a month after Celaena and Sam buy their freedom from the Assassins Guild. Together they try to make a life in the city but without any kind of job it is really hard. So, when Sam gets a job to kill the Crime Lord and his right hand they have to take it. But, as always, someone is ready to betray them and not both of them will make it out alive.

This was heart-breaking. I knew how it would end but still... I wished that somehow, something else entirely would happen. However, this novella gave us a more rounded view of Celaena's personality. From her very best to her very worst. It was so sad to see her broken, after all those times she was strong, but it really shows that after all she is still human.

All the novellas were amazing and now I am ready for the real story to kick off.