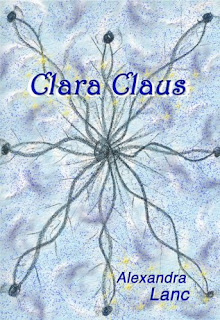 Jack Frost is well...Jack Frost. He works in the North Pole along with Santa Claus and North Wind and everyone else, making Christmas happen, but there's one special thing about him. Jack hates Christmas. He even tries to destroy them from time to time and when he gets his final notice from St.Nick, who os dying to expel him, he decides to try his last plan. But when the North Pole gets an anexpected visitor, Clara Claus, Stanta's grand-daughter, Jack thinks he should make her the tool of his revenge.

The book is very emotional, there is not so much action, but mostly things are happening inside Jack's and Clara's heads. They are both expiriencing things for the first time and they change along the way. Even if they are complitely different they both remind me a part of myself which helped me connect with them and care about them.

My favourite character was North, Jack's friend. He was so mystirious and different from any real person that made me all the more curious. I got the feeling that he always knew everything that was going on.

The things I didn't like are that the book is small and everything happens in a week time, so it felt like everything was happening too fast. I'd like it more if Jack had more time to be his usual 'hating-xmas' self and get to know Clara more slowly. Another was the ending...I am not really sure but I got the feeling that there was more to the story. There were a few lines that indicated that. And then I read at the Author's note that there was supposed to be a sequel. Supposed to be? What's that all about? I want the sequel!

To conclude, the book is a great, fast read and it's perfect for christmas!

NOTE: There will be an author interview soon, make sure to check it out!