Book Review: Dead Is So Last Year (Dead Is, #3) by Marlene Perez 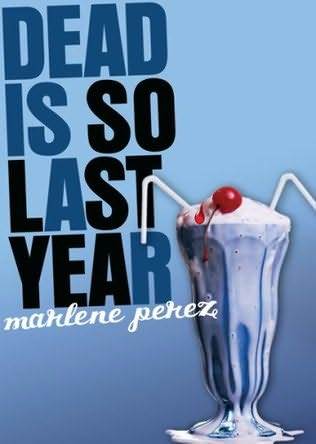 Dead Is So Last Year (Dead Is, #3)
by Marlene Perez

It's summer in Nightshade and the Giordano sisters jsut came back from their summer vacation in Italy withou their mother. While she stays back to work on a case the three sisters go back to their home to spend the rest of the summer. But while they were gone things had changed. The guys on the football team look like they are on steroids, the people of Nighshade are acting crazy for sugar and there are clones walking around the town. It's up to them to figure out who are the real residents of their hometown and who are the clones, also who is creating them and why. Especially since someone form their past makes their appearance and they can't be sure if they are a clone or not.

This one was different from the two previous books. Especially since it's summer and there is no school drama, but still had the same Nightshade charm that the series is famous for. We got to see the three sisters on tehir summer jobs, having more responsibilities than usually and then the sock of their visitor and the way they reacted. We got to know each of them better.

The clone mystery was a hilarious one, especially since the clones acted all crazy. It also ahd me guessing about who was their creator and even though it wasn't hard to come up with the correct answer I wasn't able to guess every aspect of the plot, which is always a plus. And the ending...oh my...I didn't see that coming. Now I can't wait to see what happens in the two final books.