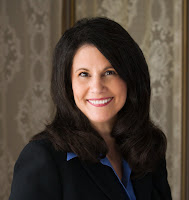 A graduate of Rowan University in New Jersey, she earned a BA in Psychology with a minor in Criminal Justice. Following graduation, Katherine attended the Philadelphia Institute for Paralegal Training earning a General Practice Certification.
She returned to Central Kentucky and worked for twenty years as a paralegal and law firm office manager.
With an educational focus on psychology and the law, Katherine’s plots typically present a mystery for the hero and heroine to solve while on an emotional search for love and forgiveness.
Katherine is a grandmother and spends several weeks every year in New York City with three of her five grandchildren. The other two live about ninety minutes away in Northern Kentucky. Her job is to spoil them, and she takes her responsibility seriously.

Question: Let's begin with your book. Tell me a few things about The Ruby Brooch.

The story has an eclectic cast of twenty-five characters, including two precocious little girls who resemble Laura and Mary Ingalls on Little House on the Prairie; a golden retriever, a Maine Coon cat, and a Thoroughbred who travel back in time and cause a ruckus; an old codger for a wagon train captain; a lawyer who whistles Bach and quotes Shakespeare; a best friend who keeps secrets, a fiddler, murderers, a fort commander, and a 21st century paramedic, plus disease, childbirth, bad water, a stampede, a two-thousand-mile journey, and an overarching mystery. Oh, and I can’t forget the passionate and sensual love story in the vein of Somewhere in Time.

Question: What triggered the idea of it, where did it all begin?
In September 1996, I read my first Elizabeth Lowell’s book Winter Fire. I loved it. Over the next several weeks, I read her entire back list. Then I moved on to Linda Howard, Beatrice Small, and several other romance authors. By September 1997, I’d read over 250 romance novels. Prior to 1996, I was an avid reader of mystery and suspense.
I sat down at my computer and started writing. Ideas had been germinating in my head. I wanted to write a time-travel romance with a mystery element that would take place in the American west in the mid-nineteenth century. The Oregon Trail popped into my head, and the rest, as they say, is history. Ten weeks later, I wrote The End to a 115,000-word saga.
As I thought about the method of time-travel, I considered a ruby bracelet I had and was able to work the piece of jewelry into the story. Over the years the jewelry has morphed into a 14th century Celtic brooch.

Question: The Ruby Brooch is about time-traveling. If you could go back in time, which era would you visit?
That’s a tough question because I like my creature comforts, but that aside, I’d like to “visit” Colonial Williamsburg, Jamestown, and Yorktown. Those were places of my childhood and to see them as they were in the 1700s with our country’s patriots walking the streets would be exciting.

Question: How did you start writing?
I started writing poetry as a teenager. The idea of writing a book came about in my thirties. It was on my bucket list along with running a marathon. Something I wanted to do but wasn’t really sure I had it in me to accomplish. My first attempt at writing a book in 1997 result in a completed manuscript that sat in my drawer until five years ago. Since then, I have rewritten The Ruby Brooch several times. It’s been through a critique group and three professional editors. I’ve taken on-line classes and seriously studied the craft of writing. It’s been a journey, but one that I’ve thoroughly enjoyed.

Question: Any tips or suggestions for new authors?
Believe in yourself. Write, rewrite, and write some more. Study the craft of writing, develop a supportive network, grow a thick skin, and don’t give up. Today, there are more options for writers than ever before.

Question: What should we expect from you in the future?
There are two more books planned in the Celtic Brooch Trilogy, an emerald and sapphire, both using characters from The Ruby Brooch. I’m currently working on a contemporary romance The Last MacKlenna. It’s a baby boomer story dealing with breast cancer and childhood trauma, and it’s a companion story to The Ruby Brooch.
I released The Ruby Brooch on the same day I ran my first half-marathon. My plan is to release The Last MacKlenna on September 15, the day I run the Air Force Full Marathon, also my first.
Distance running and writing are both solitary endeavors and are physically exhausting. They have pushed me harder than I’ve ever been pushed. Trainers/editors have helped, but the hard work is mine alone. To get to this point, it has taken dedication, belief in my abilities, and a fantastic support team.

From the white-plank fence pastures of Lexington, Kentucky to the nineteenth century Oregon Trail, Katherine Lowry Logan weaves a story rich in detail and mystery as it follows Kitherina MacKlenna’s physical and emotional journey as she searches for her identity in a time not her own.

As the lone survivor of a crash that killed her parents, Kit, a paramedic and pioneer-era re-enactor, makes a startling discovery that further alters her life. A faded letter reveals she was abandoned on her father’s doorstep as a baby. The only clues to her identity are a blood-splattered shawl, a locket that bears a portrait of a nineteenth-century man, and a Celtic brooch with mystical powers.

Soon, Kit is swept back in time to the Oregon Trail in the year 1852 where she attempts to solve a murder of her birth parents and discover her identity. She adopts the persona of the Widow MacKlenna and joins a wagon train where she encounters Cullen Montgomery, an over-bearing, egotistical lawyer with a penchant for seducing widows and intolerance for liars. If she can survive his accusations and threats, she might be able to find the answers she seeks and return home without changing history, but escaping his passionate embrace may be a too much of a challenge for a first responder like Kit.
a Rafflecopter giveaway
Posted by Unknown at 11:47