D.Gray-Man is my most watched anime and most read manga. I've lost count of how many times I watched some episodes and read some volumes. It's the kind of story that will get you attached to the characters and make you love them all (bad and good) and then break your heart and tear you to pieces. All in all my kind of story...

In the world of D.Gray-Man, Akuma  (demons) are inhabiting people's bodies. Here how it works: When someone looses a loved one, the Millennium Earl will appear in front of them asking them if they want their loved one back. Obviously they all agree to him and he actually brings their loved one back. But!!! The soul of the loved one is now turned into an Akuma and they kill the person that called them back and steal their body. Pretty creepy, right? In this world there is a group of people ruled by the Vatican, they are called the Black Order, and they are exorcists equipped with weapons called innocence that can kill Akuma and free the trapped souls. Allen Walker is one of those exorcists. And the story begins when he joins the Black Order central and his life intertwines with those of the other exorcists and Akuma and the Millennium Earl and the Noah. What are the Noah? They are like the first clan of men on earth and they are working with the Earl to kill the exorcists, their stories are all pretty much tragic and even though they are essentially the bad guys, you can't help loving them. 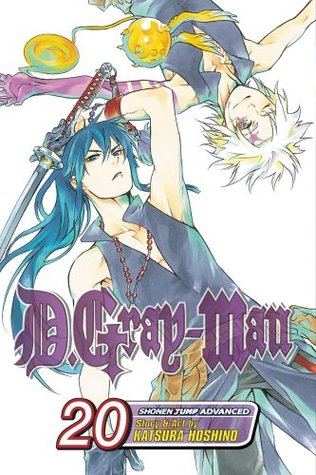 So this is what D.Gray-Man is about, it might sound simple (or not) but it's a very unique and beautiful story that will make you feel all the feels. There are a lot of hilarious moments in each volume but also a lot of sad one and gruesome ones too. It's a tough world that Katsura Hoshino created. Every character in the story struggles to fight for what they want to protect. This is one of those stories that I can't picka a favourite character because all of them are amazing. Allen is the sweetest, most damaged person, he always wants to keep on moving forward and create his own path no matter what destiny has in store for him. Then there is Lenalee, who makes the Black Order look like a real family and the most important thing for her are her friends. There is also Kanda, who has the most tragic love story I've ever read (no kidding I cry every time I think about it). And Lavi, who is so funny yet so sad and mysterious. Tyki, my favourite of the Noahs, for whom I have such high hopes. And many more...

One other thing I need to point out, is the artwork of this series. Even though in the first few volumes is a bit rough it gets so much better. The characters are all beautifully crafted. As you can tell by the two covers (Vol.1 above and Vol.20 on the right) there was a huge change in the artwork. And I love how it ended up being.

The only problem with this one? The author stopped creating new chapters! Yes, people this series is incomplete. And even though people keep on asking for a continuation (and an end) there is no word as to what will happen. But even incomplete this is my favourite manga series. It's just that good!