Thank you for allowing us to do a guest post on your blog Veronica! We were excited when you invited us and even more thrilled when you gave us an awesome topic to talk about. We've been asked in interviews what it's like to co-author a book with another author, but we haven't really dug in deep and written an entire post on it.
As you can see from our six books, the two of us only write together. This would seem odd to some people, but for us it works. Many people have asked us when we are going to write on our own, but at this point we don't have any plans to do so. Why fix something that isn't broke? We write well together and as far as time efficiency, we can write more with two people as well. It has worked great for us so far. After all, we've only been writing for a year and a half and have already published six novels. That's equal to one book every three months. Also, a big perk for us is the fact that we are both there to spur each other on, to hold each other accountable and to challenge each other to push our writing further. It's like the buddy system when you choose to start working out. You need that buddy to tell you to get off your booty when you are being lazy and trying to cop excuses.

Now, co-authoring a book isn't for everyone. You have to have a high level of trust to share your creative outlet with another individual. You also have to have an even higher level of honesty and willingness to cooperate. When you are a co-author, you are instantly a team and you have to be a team player. You have to both be willing to put in equal effort and you have to both be willing to compromise on ideas and blend writing styles. We can't emphasize the trust factor enough either, because you will technically be going into business together. You will be sharing the profits equally with your co-author and the last thing you want is any hostility when it comes to the percentage of payment each person gets or any hard feelings about one person doing more work than the other. Thankfully, we don't have to worry about this on our end as we have been best friends since the sixth grade and would trust each other with our life. We also think on very similar wavelengths when it comes to writing. When it comes to the technical and marketing aspects of putting a novel out there, we both take on equal rolls in the areas we are strongest in. So it's a win, win situation for us.

So how do we do it, how do we work together to produce a novel? Honestly, everyone has a different method for how they would write a book. Some have extensive outlines mapping out every twist and turn of the novel. Then on the other side of the spectrum there are writers like us, who really just go with the flow and wing it most of the way through. We also have multiple Skype dates throughout the writing process to get a grasp on where we want the book to go. We live close enough that we can get together in person, but sometimes it's nice to just sit there in your pajamas with no makeup on and brainstorm without either of us leaving our homes. On our Skype dates, we usually hash out ideas and nix others until we have that OMG moment that inspires us to snap into a writing frenzy.

Our writing ends up being a lot like creative writing where you are given a prompt and told to run with the story. Essentially, when one of us writes a scene and sends it to the other, the other will edit what was just written and then take up where it left off. Then we go back and forth, back and forth until the book is done. At the end, before we send it to the editor, we do one final read through to make sure that everything made sense and didn't get lost in translation. One tool that has been priceless to us is the review plane in Microsoft Word. By turning this on in the document, we can see what has been added and what either party has deleted. We also love to add comments to our document. We will insert a comment when there is an important piece of information that we need to remember, when there is a quote worthy sentence, to encourage each other or to simply make fun of each other. We have a lot of fun with our writing relationship. Here are some screen shots of memorable outtakes we've had while writing: 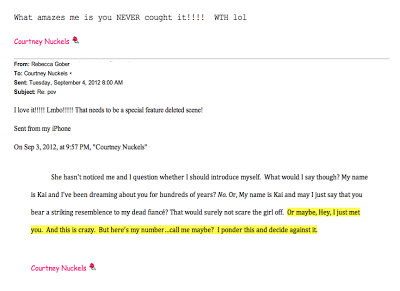 (This was too good not to add to our Night Marchers Special Edition as a blooper!) 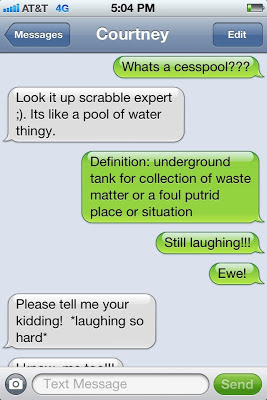 (This one is from when Courtney was describing the underground pool of water in the shelter of Project ELE. Thank goodness Willow and Alec didn't go swimming in that cesspool! LOL!)

As you can see, we have a blast sharing our creativity with each other and our fans. We hope you've enjoyed this guest post about the world of Co-Authoring. We'd love for you to check out our books too. If you have any questions or comments for us, we'd love to hear them!

Thanks for listening to us! 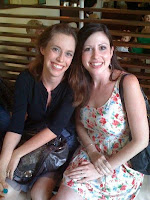 Rebecca Gober and Courtney Nuckels are down home country girls powered by chocolate and other random late night cravings. Coined in southern twang, they bring new meaning to the word y'all. BFI's since the 6th grade, with a knack for getting into sticky situations, has resulted in countless ideas to write about for years to come.

Rebecca and Courtney co-authored their first book, a young adult paranormal romance: Night Marchers in October 2011. They released their second book in The Night Marchers Series: Redemption, in February 2012. Since then they have gone on to write a new young adult apocalyptic series called The ELE Series. Currently there are three books published in The ELE Series: Project ELE, Finding ELE and Exposing ELE. They just released the fourth book in the series, Surviving ELE, in February 2013.

When not writing, Rebecca and Courtney spend time in their Texas homes with their families and their oversized dogs who still think they are puppies.

Where can readers check us out?
Blog: http://nightmarchersseries.blogspot.com/
Facebook fan page: http://www.facebook.com/nightmarchers