Book Blitz: In All Places by Misty Moncur & Giveaway 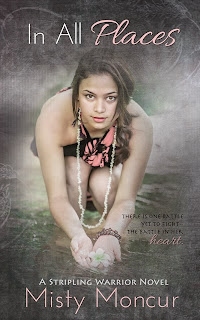 In All Places by Misty Moncur
To be released on December 10th, 2013

After defeating their enemy at Manti, the Ammonite warriors are free to return home. But for Keturah, returning home means putting her weapons down and leaving the warriors she has come love. She misses Reb’s stupid jokes and even the hard, awful work of being a soldier.

But fighting Lamanites on the battlefield was easy compared to returning to the life of a village girl. She wants to honor her family’s wishes and marry Zeke, but honor will come at a steep price.

Zeke might have won Ket’s loyalty with his blood on the battlefield, but he knows he hasn’t won her heart. He’s tired of trying to make her love him, and for Zeke, loyalty just isn’t enough.

Gideon knows Keturah is practically betrothed to someone else. He thought he was prepared to take her home to Melek and leave her there, but that was before he let himself kiss her in front of the entire village.

Whether Keturah is at home or on the battlefield, there are still battles left to fight—the battles in her heart.

Fall in love with Misty Moncur’s stripling warriors, who come alive against her vivid Ancient American backdrop. An intriguing blend of adventure and romance, In All Places is the unforgettable conclusion to her Daughter of Helaman trilogy.

About the Author:Between working and raising a family, Misty fits in writing like other people fit in breathing. Misty writes in the Romance, Young Adult, and Religious genres. She lives in Utah with her husband, her Wii-addicted son, and her curly-haired daughter. They spend a great deal of time laughing and the rest of it eating pizza.


Misty is offering 1 ebook copy of IN ALL PLACES (INT)
a Rafflecopter giveaway
Posted by Unknown at 09:00