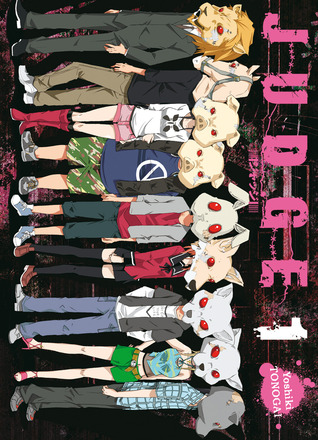 Judge
by Yoshiki Tonogai
(Review for whole series, no spoilers)


The first three or so volumes were a bit slower from what I am used to with Tonogai's stories but once the revelations started there was no stopping.

Judge is a game of judgement (dah!). For Judge 9 players are abducted, each one has one of the 7 deadly sins to be judged for. Every 12 hours they have to vote for the one of them that will be killed. Simple, right? NO!

When 9 strangers are put together in an abandoned house (or whatever that thing was) and the rules of the game are laid in front of them everyone will do pretty much anything to survive. From fights to plotting devious plans and alliances, only four can make it out alive.

Judge was a very sick and twisted game, so of course I loved it. The beginning was a bit slower. There were a lot of arguments about how they should vote. They players never really did what the game master was asking them, which was to judge the sins of the other players. They never really talked about what each ones sin was and we only got see a few of their stories as flashbacks.

And as the story progressed and people started dropping dead it seemed like they might get what was promised to them but then there were like million twists and things went downhill pretty fast for our remaining players. I loved how things progressed, it only made sense that I couldn't tell who was the bad guy in this one. But I am proud of my mystery solving skills that I had the right suspect (almost) by volume 3.

If you are into manga and fast paced thrillers, sick stories and horror this is definitely one you should read.