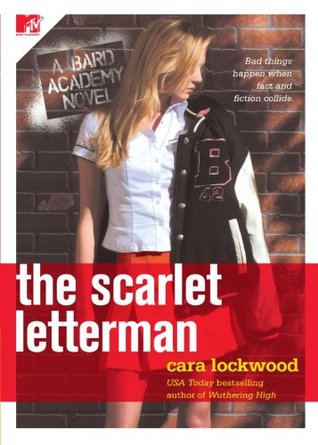 After 3 years had gone by I finally decided to pick up book 2 in the Bard Academy series. Sometimes when it has been such a long time I would either lose interest in the series or won't be able to easily go through the next book, because I would have forgotten a lot of details. But after reading the first few pages everything that happened in book one came back to me (with a little help from the author) and once again I found myself wondering the halls of Bard Academy.

It's the second semester that Miranda has to spend at Bard Academy but this time around she knows a lot more than she used to. For one thing, her teachers are the ghosts of classic writers that had gone to an early grave and the island where Bard is located is their purgatory. Also, characters can come out of books, like Heathcliff, who is after Miranda's heart. But not all of them are good, like Dracula who Miranda and her friends had to face on her first semester or the mysterious monster that attacks students at night.

This time around Miranda's life is very different she has a cute boyfriend, Ryan Kent, and luck seems to be looking up. Until the rumors about her and the reason she wears Ryan's letterman jacket start to spread. Having to go through that all the while trying to also find out what is attacking students and wondering if Heathcliff is ever coming back to Bard is going to keep Miranda and her friends very busy.

This was such a great read. It had everything I loved in the first book, a lot of action, some hilarious moments (Miranda and her friends are hilarious) and some literary adventures. Once again one of the ghosts has a plot to get out of purgatory and destroy the world at the same time and Miranda and the gang have to stop them. I love how since I haven't read the classics I get to learn a lot about them through this series. Also I loved how this book ended.