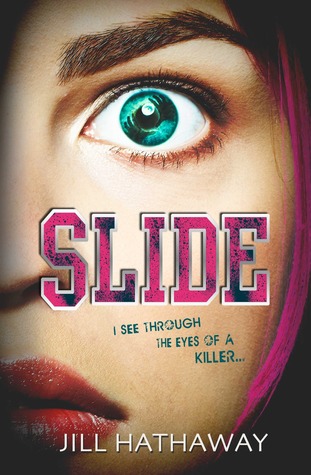 Slide was a bit disappointing for me. I started this expecting an amazing paranormal mystery, maybe a bit creepy too, but that is not what I got. In Slide, we get introduced to Vee, a girl that everytime she falls asleep she can slide inside someone else's mind and see through their eyes. And one day she slides inside a killer that just murdered her sister's best friend. Still, the police thinks it's a suicide and only Vee knows the truth.

Let me start by saying that I loved the idea behind this book. Vee has such an amazing power and she could have been such a kick-ass heroine but she choose not too and that was a bit disappointing. The story moved really slow and only after two thirds of the book Vee realised she could use her power to figure out who the killer is. So, there was no action at all. Still I expected at least a few heart pounding moments at the end but they never came.

Besides the slow pace and no action, that romance was just not working for me. Vee has this amazing best friend, who is totally cool and it's pretty obvious is in love with her, but when a new hot guy shows up at school she is falling for him in a matter of seconds. That's a big no for me. Also she acted like a bitch toward her friend, but since she wasn't the biggest bitch of the book I guess it wasn't that bad.

Anyway, this was not for me. I got bored halfway through it and just pushed myself to read it hoping that something amazing would happen at the end, which didn't...