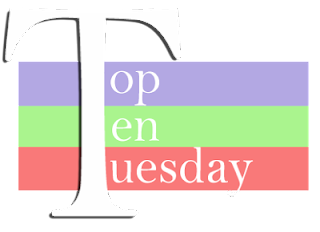 Top Ten Tuesday is a weekly meme hosted by The Broke and the Bookish.

Welcome to my second TTT. This week we are talking about our top 10 intimidating books. I think I am going to stick to books I have and intimidate me with their size.

1. Balefire (Balefire #1-4) by Cate Tiernan: 974 pages
I love witches and stories about twin sisters and I am dying to read this one but it's so huge. Yes, it's four books combined in one but I'm scared to start it.

2. A Clash of Kings (A Song of Ice and Fire #2) by George R.R. Martin: 911 pages
I have this on my Currently-Reading shelve on goodreads for over a year now. Truth is I reached the middle of it but stopped reading cause it takes me such a huge amount of time to read Martin's books. Still, I do want to keep on reading. I stopped watching the tv show so that I can read the books first. This is a truly awesome series, but the books are just keep getting bigger and bigger.

3. Under the Dome by Stephen King: 880 pages
What can I say, I should have joined the read-along that's been running through this summer. I have the huge hardback version of this one which only makes the book seem more enormous. I knew when I bought it that it'd be hard for me to start it, but I read a sample from amazon and the story of a city trapped inside a dome just kept resurfacing in my mind and I knew I had to get it (and eventually read it). And now it's going to be a tv show too (yet another one I will try not to watch before I read the book)

4. Until the End (Final Friends #1-3) by Christopher Pike: 846 pages
Yet another omnibous edition. Looking at my shelves I realise that every book I got by Pike is an omnibous edition. I did enjoy Chain Letter by him and really want to read yet another creept story but it's almost 900 pages. That's huge!

5. The Eye of the World (Wheel of Time #1) by Robert Jordan: 814 pages
It's a good thing that they split this book in two parts but still it's one huge book and it's just the first one to a huge series. I am more intimidated by the size of the series and not so much the book's. But after the Riftwar series reached its end I do need another epic fantasy series to keep me going.

6. Theft of Swords (The Riyria Revelations #1-2) by Michael J. Sullivan: 664 pages
I loved loved loved the prequel for the series and imidiately bought the first omnibous of the two first books but it's been sitting on my shelve ever since (over a year now). But lately I've been getting really anxious to read it and I am probably going to pick it up soon.

7. The Way of Shadows (Night Angel #1) by Brent Weeks: 645 pages
Three big books for this series, but at least there are only three of them and I got them all. I am just waiting for my assassin mode to take over me so I can get lost in them.

8. The Black Prism (Lightbringer #1) by Brent Weeks: 629 pages
Another huge hardback edition. Big mistake those are. It just makes the book look even more intimidating. I need to stop buying them but they look so pretty on my shelves.

9. No Time to Die & The Deep End of Fear (Dark Secrets #3-4) by Elizabeth Chandler: 624 pages
I loved the first two books of the series. Both were small, close to 200 pages each, so I get why they combined them. But this one is huge each book is 300 pages, why make a even bigger omnibous edition. I get epic fantasy books being big, but it's harder to start a YA book when it's that huge. I am just going to have to treat this one as two book to eventually read it.

10. In the Woods (Dublin Murder Squad #1) by Tana French: 592 pages
The last book on this list and the one with the less pages. Still it's big but it's different from all the others. A murder mystery that I would love to start eventually.
Posted by Unknown at 07:00